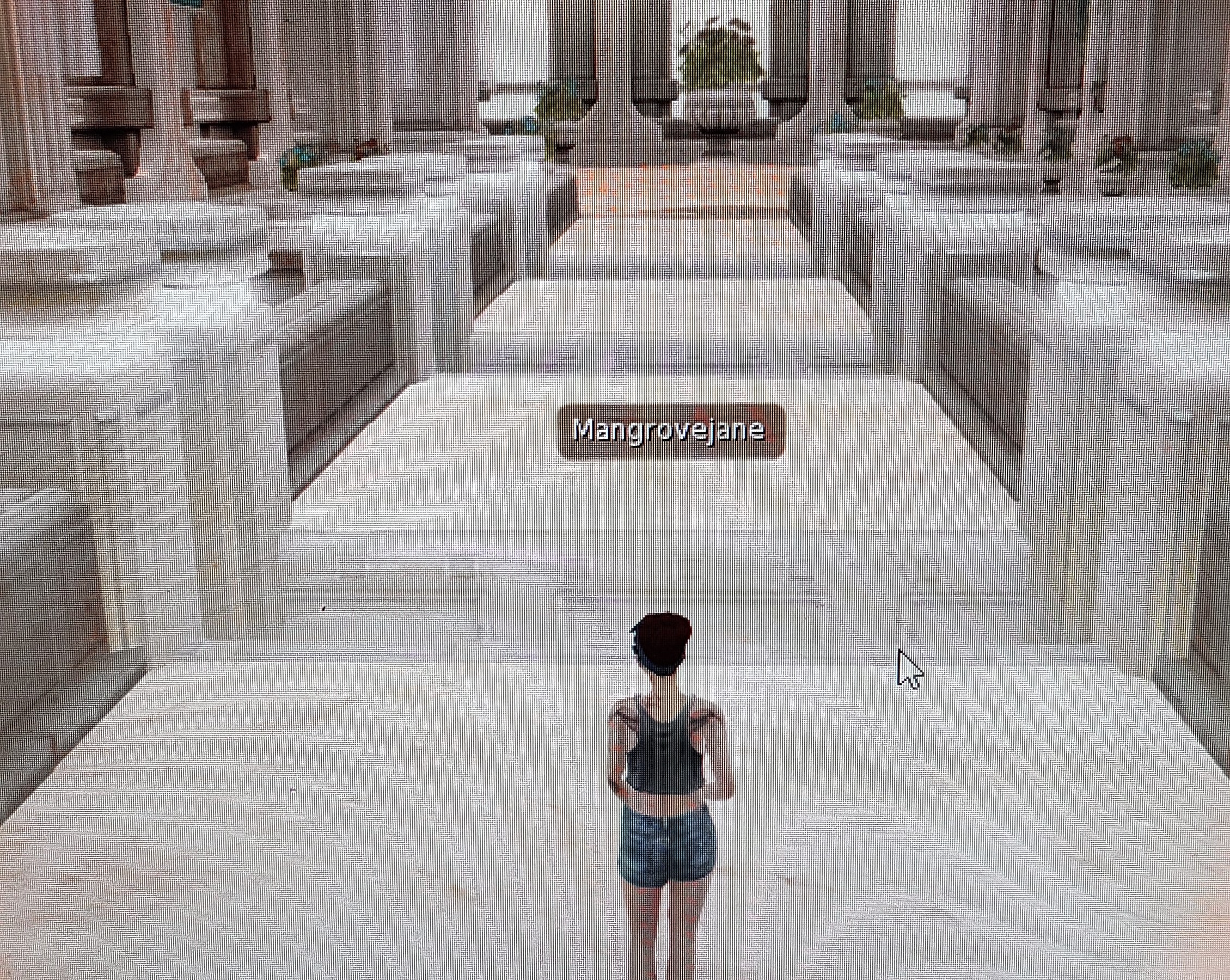 Well hello there! How YOU doing?

I guess I should introduce myself and tell you what I am doing here. My online name for as long as I have been online is Mangrovejane. You know…like the fish, Mangrove Jack only the female version. I chose this name a long time ago because at the time I was studying Environmental Science and had a great love for Mangroves. Yes. The trees. Don’t make me justify that. Just accept it.

I am an artist. And an arts worker. A creator of Fantastical Things. An explorer of virtualities and a philosopher on the nature of realities. I am currently in the process of applying for postgraduate studies in Art. I’ll let you know how that goes 😉

So….after reading a number of journal articles about art in a simulated online world called, “Second Life” and thinking about my Masters Proposal I came up with this BRILLIANT (ridiculous) idea of starting my own second life avatar to see what this was all about and whether it would actually be possible for me to make the mental leap from real life art to virtual art. I was also insatiably curious about what Art and Art Galleries and installations LOOKED like in Second Life. It is one thing to read about it and be told, but when you are in there…immersed into the simulation things are often very different.

So what have the past 5 days been like for me? To quote a song from Charlie and the Chocolate Factory…

Day 1. Make my avatar and play tutorial. No worries. Piece of cake. I am not a gaming noob. I have played the Sims! I have an active WOW account! Nope. Turns out, I am an idiot AND a noob.

I chose a standard avatar. One with Tattoos and glasses….YEAH BABY! Actually…I have tattoos and glasses and stupid hair in real life. I may have just picked me. Yup…I could have chosen to be Ms. Sexy McSexpot but nooo….I choose awkward nerdy socially maladjusted woman.

As my son said, “Just as boring in your second life as you are in your first life…” Thanks son.

So, the first thing after choosing my avatar and pondering the psychological implications of that, was to get through the tutorial. Now, I should mention that they make tutorials easy for a reason. They WANT you to be able to get through learning the most basic things without feeling like you are a complete noob so you keep on playing. I should also mention here that I have NEVER been good at jumping in games. Not ever. I feel like it is my disability. So when confronted with a test to jump over three gaps in a walkway during the tutorial, I had a small panic attack and then proceeded to fail 62 times. Yes…you read that correctly I said SIXTY TWO TIMES. I am not only jumping impaired, I am excruciatingly stubborn.

And once I had finally made my way out of the tutorial and got thrown into a place called social island, overwhelmed and exhausted from all that jumping around, my first day in my second life ended.