Wavie Haller and the Consignment Bookcases

Sometimes my friends put up with a LOT from me and I have to say, my friend Wavie Haller, who you might know as the guy behind Consignment furniture, puts up with more than most. I first met Wavie when I went to buy a model of DNA he had made from an event for 99L but the vendor didn’t work. Alicia had suggested we TP to Consignment, which I had not known about until that moment and see if there was one there. And there was…but I was not willing to pay full price for it, because apparently I am also stingy and love a bargain. So once again, on Alicia’s urging, I sent him a notecard explaining to him and asking if I could buy it off him for the event price. Wavie actually sent me that DNA for free which started a Linden war like no other that still rages to this day where I try to give him the 99L and he gives it back to me, both of us equally insulted at the other’s stubbornness.

Then there was the time he found out I liked one of his pieces of furniture and bribed Alicia to tell him what it was. The next thing I know, it lands in my inventory. He wouldn’t take any money for that either…which once again…a severe stubborn streak made me indignant enough to rip it apart and make Alicia help me to set up and take a photo of us pushing it off a bridge. I accompanied that with an anti-ad on my blog because it amused me so. I remember Wavie telling me, ” I want to be mad at you but that picture is GLORIOUS!” and the ad made him laugh…so continued our weird and screwy friendship.

Another time he gave me a pack of motorcycles he had made because I really liked vehicles and I was going to play the gacha for them. Once again…a steadfast refusal to take money for them led to this… 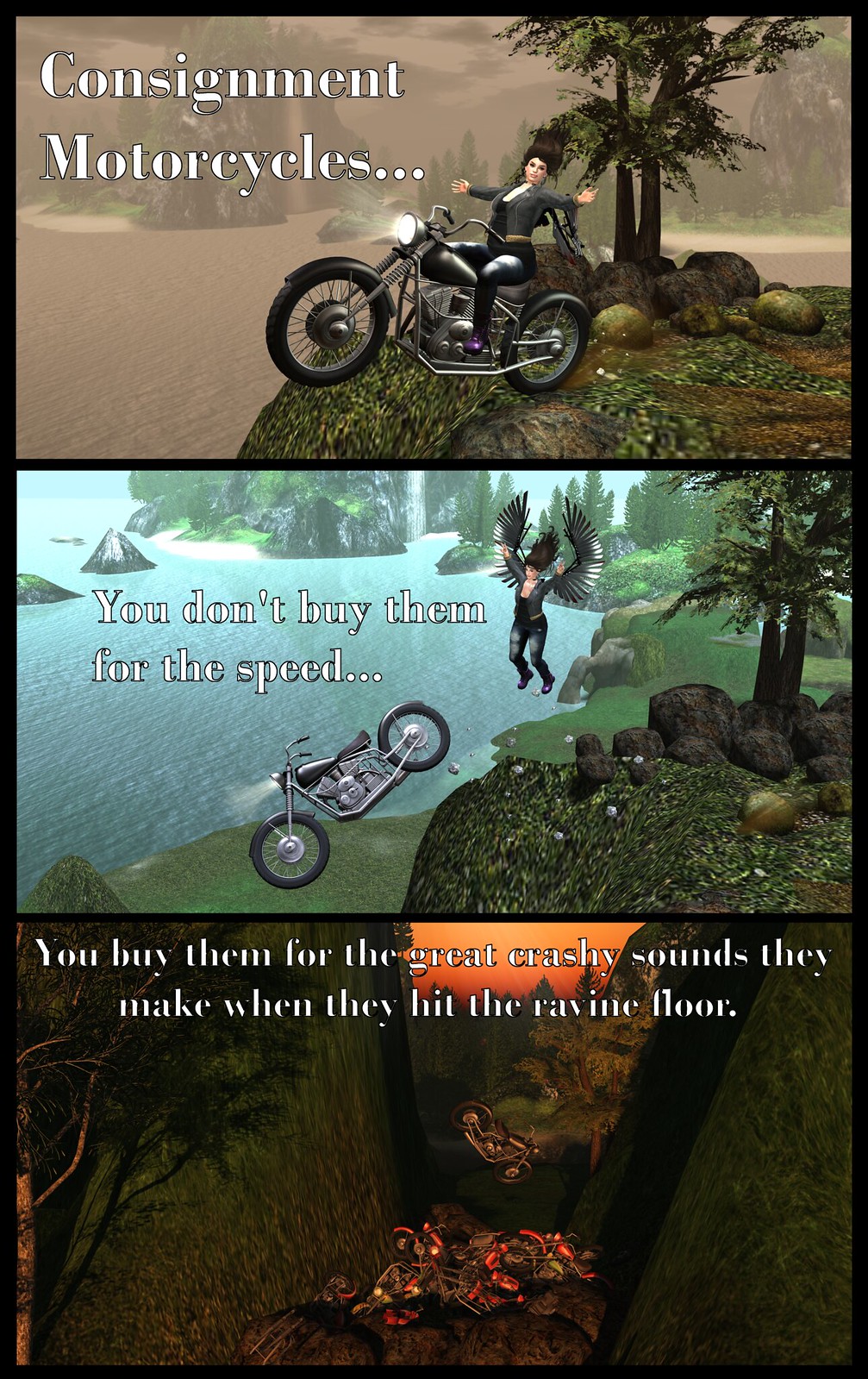 …which I consider to be a GREAT way to tell a story and it is still to this day, one of the favourite things I have done. I had a ridiculous amount of fun setting up for each of the photos and telling the story in the anti ad.

So yeah…I haven’t even mentioned the yelling, name calling and general jerkiness that tends to define our friendship but there’s a lot of all of that on both sides, done with an almost aggressive fondness and fierce amusement.

Recently though, we were chatting and I was talking about a library I wanted for my house and the next things I know the darn thing lands in my inventory. I considered doing another anti-ad but on reflection I decided to do something Wavie is going to find even more startling and give you my honest opinion of it.

When you get the Consignment box and open it, you will be confronted with an ENORMOUS folder. One of the things Wavie is GREAT at is making these modular kits. IF you have seen the Consignment kitchen, you will know exactly what I am talking about because you are probably still using it even if you have changed houses multiple times. It’s modular nature, customisation possibilities and beautiful design make it really appealing to a wide variety of styles. And the same can be said of this library.

You can use just one of the bookcases on its own or you can connect them together to form a library suited to just about ANY house. The many different pieces will let you fit this into the space you have and if you need even more flexibility, its all modifiable so you can easily edit bits with very little effort.

When I put my bits together, I often use the align tool. Be aware it won’t always work the way you expect it to and it is best used for items of the same size and straight shape. Mostly though, I just eyeball things and try to line them up as best I can.

The pack also comes with a texture change HUD which changes the colour of the cabinets to any of 6 different choices. Wavie told me that these aren’t really tintable but I totally went ahead and tinted them anyway. It’s just that you can’t separately tint the handles as they are connected as a face to the frames they are on. S’if that is gonna stop some of us RIGHT?? If that annoys you though..feel free to drop him a notecard and complain about it…

Despite the fact that it is named after me and made by someone I know…I genuinely like this bookcase. I would have bought this bookcase. The only complaint I have is a small one…I would have liked a half sized bookcase as well for places like underneath windows. Other than that though…I like it. It is well designed and thought about and a piece that will probably stay with me through many changes of house. If you would like your own consignment bookcase, it is out now at the Fameshed event which runs through until the 27th April for a BARGAIN 585L. After that, I am sure you will be able to purchase it at the Consignment in world store. 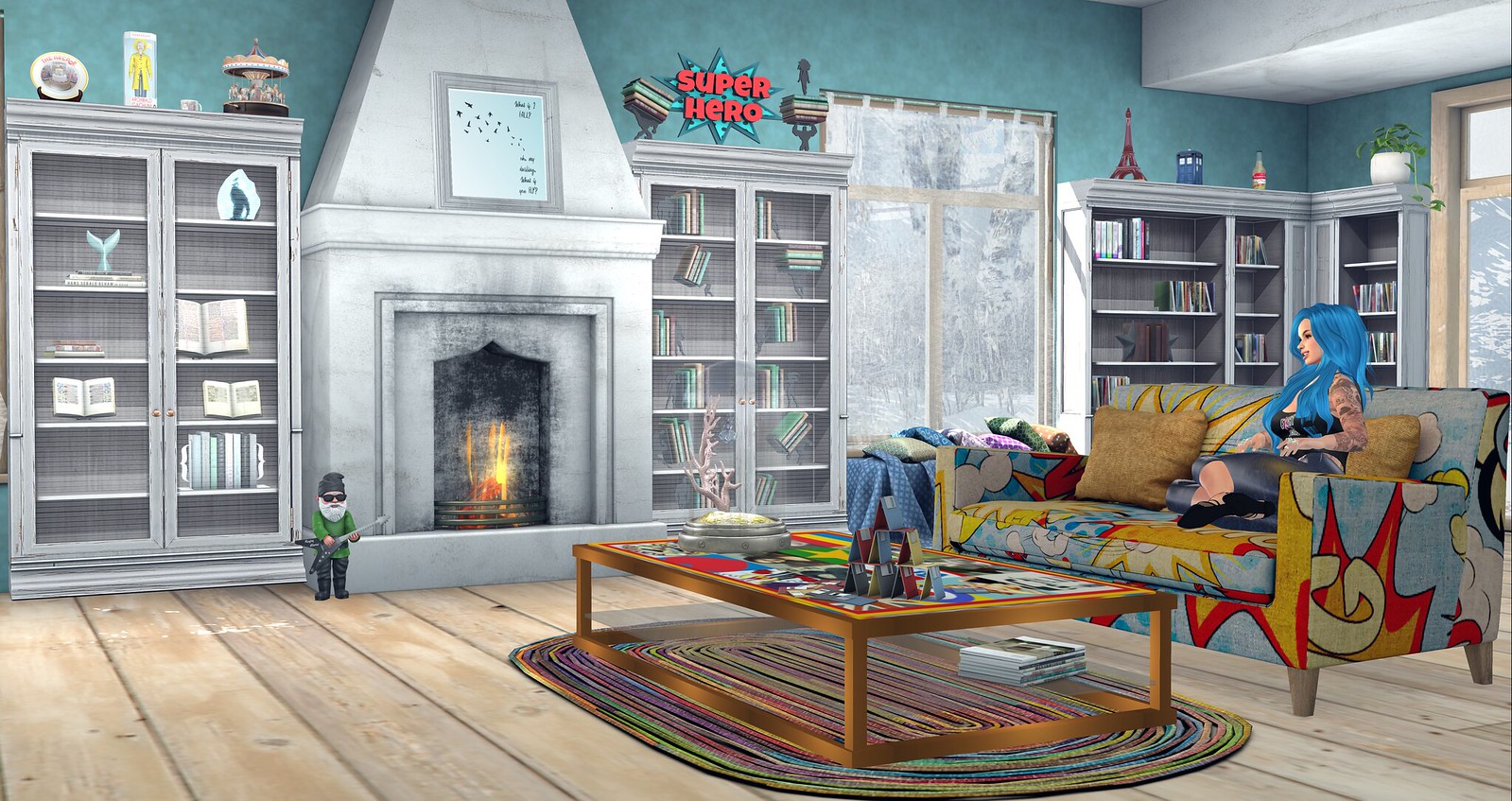