I thought I should share this here as this is what I do in between blog posts and my art degree and…life. I make videos about the world of Second Life. I hope you all enjoy it as a change from my wordy ramblings!…

Some thoughts on my very first Second Life Birthday celebrations

In Search of Inspiration

A post in which I try to find some inspiration to bash down the creative block in my mind.

Living on the Mainland

I went looking for other people’s experiences of living on the Mainland in SL and couldn’t seem to find any. There are a few posts about living in Bay City but there is more to the mainland than that! I want to state straight…

My Avatar, My Self and the Rhythm of Days

Lately I seem to be doing a lot of photos like this… Apparently I am craving quiet and peace. Maybe it has something to do with my hectic life.  It’s been awhile since I have written a blog post, mostly because..well…life. The rhythm of my…

The University of Western Australia in Second Life

The Splendor of Rivendell

A post in which I feature THE BUILDERS BREWERY

A post in which I do my first photo shoot 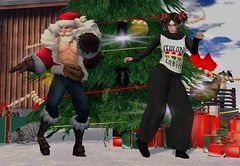